HARRYOKE! ENTERTAINMENT! is a company operated by Harry Smith.
Harry has been a full time DJ and karaoke host since May 1999.

Karaoke with Harryoke is the karaoke side of HARRYOKE! Entertainment; currently performing several nights a week at clubs in the Volusia/Flagler area. I am also available for your private function anywhere in greater Central FL (Volusia, Flagler, Seminole, Lake, Orange, Osceola Counties and surrounding areas). Whether it is a formal gathering such as a wedding, or a party at the house, I can provide all different types of music, and specialize in a diverse selection of Karaoke tunes for you to sing. My song titles vary from the 40s and 50s to todays current hits. There is a title for every taste! I have a professional high power sound system that delivers clear sound at any volume level. This combined with an attentive DJ/KJ ensures you will sound your best. In addition to karaoke, I also have a diverse selection of music for any occasion for DJ services. I do not use a small low powered home system, I bring to you professional sound gear!

In addition to Karaoke shows, I am also capable of providing DJ services for most occasions.
Hosting and emceeing services are available for any occasion including but not limited to:

* Weddings. (See link at top of page for specific wedding info!).
I will help you plan your reception, and coordinate an itinerary with your caterers, photographers and other service personnel.

* Class Reunions
* Corporate Events
* Fund Raisers
* Birthday Parties
* Any get together with the need for music, an emcee or announcer and a clear sound system or public address system.


Contact me for a consultation to find out how I can help you with your next event!
I am well versed in most music styles.  My personal DJ specialty is music from the late 50s to early 90s.


A NOTE TO POTENTIAL WEDDING/EVENT CLIENTS:  What I do in the bars is not what I do at your event.  I have specific equipment for each job, and am able to separate the informality of a bar setting from the formality and tradition of a wedding or other event.  If you come to a bar show to see who you are considering for your event, please take that into consideration before making a final decision.

Anyone who is looking for a unique entertainment experience, whether it is a private party, a public gathering or a contracted club gig. Any place that music or karaoke would accentuate the affair is the place for me to be! In the private sector, the services I typically provide are karaoke shows and DJ services for any occasion. Music makes any event better, and karaoke is the hit of any party! Call me if you are looking to have music/karaoke at a party, reunion, wedding, birthday party, corporate event, or any occasion where people are congregating for a good time!


A Personal Word To My Friends and The Karaoke Community:
Thank you SO MUCH for your support. You have helped me make my show successful, and allowed me to improve my show and I sincerely appreciate all of you. Thank You!! Whether you visit my show or another show, just keep going to those karaoke shows. Your support of the karaoke community as a whole is what keeps the genre alive!! If you know of a good show, be sure to tell/bring a friend. Spread the word!


**HARRYOKE! Entertainment maintains a friendly relationship with other karaoke shows and DJ's in the area. If I am not able to fulfill what you need, if I am already boooked on the day you need me, or if I feel that someone else may be better suited to fit your needs, allow me to refer one of my associates in your area!
Thank You!

HARRYOKE! Entertainment uses only professional sound components made for a professional setting, not small home components. Vendors I use include: Shure, Audio-Technica, AKG, JVC, Mackie, Alesis, Gemini, Crown, QSC, Yorkville and JBL and others. 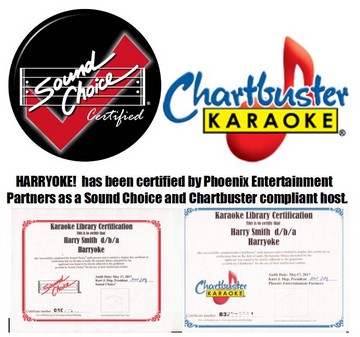 May 15 1999:  First karaoke party - birthday party for a family friend, across the street from the folks I bought my first gear from.  Considered it a training session and demonstration.  If the gear worked, and I knew how to use it, I would buy it.  Drove up with an empty trailer and left with a new business.

June 6 1999 - First Orlando show at Red Baron.  Was thinking I wanted to work in Orlando, so I was learning in Flagler, but looking for venues in Orlando. Just played there for the month of June, they changed management, and the building was eventually sold and torn down in the name of progress.

June 18 1999 - Started working for Jack Vedder at Glen Abbey in DeBary.  Never really picked up there, and that is where I met Ed who owned Peggy's Place, soo.....

July 9 1999 - Started at Peggy's Place.  Some of the best memories there ever.  Reluctant to start, but hated to leave...stayed until it closed.  It is now JTs Seafood in the Hammock.

Nov 18 1999 - Started working for George at what was then the Damn Yankee (Now Fisherman's Net).  When it was just the bar and restaurant, they used to stay open till 2 with entertainment, and I played there on Thursdays.  After the remodeling in May of 2000, they stopped having entertainment.  I still work for George doing his employee and private parties.

Jan 30, 2000 - Took Super Bowl Sunday off...driving my 66 Galaxie blew a tire on the Broadway bridge and wiped it out, and put my head thru the windshield.  First example of other KJs coming out to help me until I got better...but I did not miss a day of work, although I did come to work with my head wrapped for a few days!

Sept 16 2000 - Working for Jack Vedder again at the hotel on Old Kings and 95 across from Plantation Bay...called the Duffers Lounge.  Bar closed in Dec.

June 14 2003 - First ballroom show at Halifax Plantation.  Got into the habit of working there about every other month, selling advance tickets and serving appetizers the first hour...did this until the bar was built.

July 22 2005 - Harborside closes to begin it's new future as a construction site.  LOL.

Dec 23 2005 - Halifax Plantation converts the pro shop into sports bar, and I begin my Friday nights there!

Jan 5 2006 - New owners of Finnegan's wonder why Ladies Nights have been sucking, attendees say because I am not there, and I return to reawaken my creation, LOL.

Oct 6 2008 - Switched to Mondays at La Mer, and started Tuesdays at the new remodeled Finns.

Sept 29 2008 - Last day at Mothers - closed, lost their lease, moved to the Dog Pound in Bunnell...I did not remain with the organization.